You are here: Home / Juniors / Round 4 & Overall Results – Victorian Junior Motocross Championships
Back 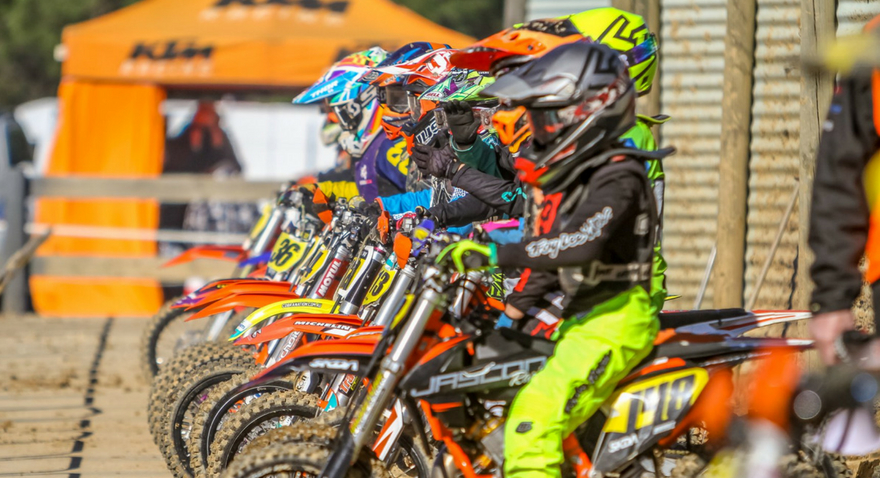 Round 4 of the Victorian Junior Motocross Championships got off to a damp start with a massive bout of rain hitting the Monza park track on the Friday! The good news for the club is that they didn’t need to water the track! The water provided a challenging start to the day on Saturday with lots of ruts being created giving all of the competitors a bit more work.

Ry Hazell put on a great show as one of the most consistent and dominating racers of the season, this paid off in a big way for him as he took out the 65 C-Grade class for the year. He has been so consistent this series, staying at the top of the pack that it didn’t affect his overall score at all when he stacked in the second race of the day in round 4 which meant he missed the last 2 races of the round (due to being carted off to hospital), yet still managed to take out the championship!

Hixson Mcinnes took out the double, cleaning up overall for the season in the 85 SW A-Grade and the 65 A-Grade. Young Billy Cameron also put on a good show following up Mcinnes with a solid season and taking the double in second place in the same categories.

Blake Mcpherson put in a stellar performance taking out first place in the 250 B-Grade and second in the 125 B-Grade.

Jessica Robertson is a real gun, using her home track to her advantage! She came runner up to Tanesha Harnett in the Girls class. Harnett is a local NSW girl who rides a 250, while Robertson a Victorian cleaned up with second place on an 85! Macie Mcnaughton took out third place also on a 250.  Robertson is by far the best of the Victorians – to get second overall in the Girls class on an 85 is a stellar effort. Robertson’s potential is massive and we are super excited to see what she has in store for us in the future.

Madi Healey – another Victorian girl – came consistently third throughout the season, but missed out on the overall, as she opted to participate in the King of MX in NSW, missing a whole round while Harnett was down here cleaning up at the Victorian Championships.

Macie Mcnaughton is a young one to watch! Mcnaughton was consistently rolling around the track, her consistency is her best strength, which is essentially what helped her take out overall third in the Girl’s class.

Kaylee Cameron will step up from the under 12 85 SW C-Grade class in to the Girl’s class next season. Cameron is an impressive rider and we cannot wait to see what she has instore for us next season!

Everyone has put in a fantastic effort this season! We cannot wait to see what is in store for next season!

A stellar effort is also put in by the Motorcycling Victoria Motocross Management Committee. Without the hours of tireless work these guys put in; these events would not be possible! Also a massive shout-out to the volunteers, coaches and officials who all give up their time to make these events the best they can be!

Now preparations for the awards night begin! Tickets will be announced shortly and will be available through Cloud Entries. Watch this space for more information as it comers to hand.