MX Nationals Round 2 at Wonthaggi

You are here: Home / Broadford / MX Nationals Round 2 at Wonthaggi
Back

ROUND 2 AT WONTAGGI DONE… NEXT UP ROUND 3 AT BROADFORD 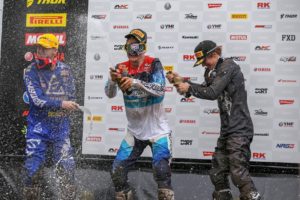 Wonthaggi played host to round two of the Pirelli MX Nationals on Sunday, with the championship again falling victim to tough weather conditions the riders found themselves pushed to their limits and results shaken up.

DPH Husqvarna rider Wilson Todd, dominated the Pirelli  MX2 class in both the back to back motos, and the traditional 20 minute moto, finding himself on top of the podium for the round and gaining the red plate coming into round three at Broadford.

Raceline KTM Thor rider Regan Duffy had a straight sweep qualifying first and dominating in both the motos in the Motul MXD class and taking the red plate.

Series promoter Kevin Williams paid tribute to the club and all volunteers for their efforts of the weekend.
“It was a fantastic weekend of racing, we were again challenged with tough weather conditions, however the club did a fantastic job with track preparation, and the volunteers who helped through were really a credit to the event” Said Williams