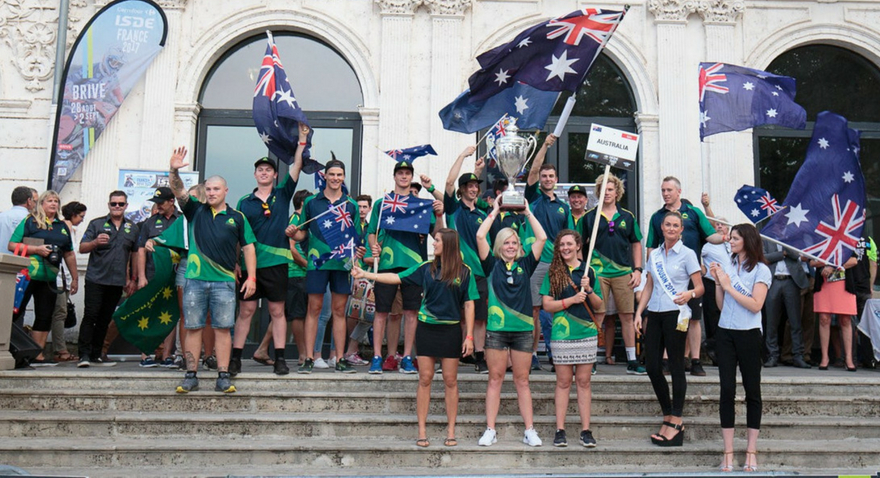 The four man team of Captain, Rob Medson, Dakota Ballantyne, Matt Pickering and Seth Hickey were solid, with even contributions from the top three riders as each of Medson, Ballantyne and Pickering finished their day with twelve points each and their number four rider contributed a good seven point haul to take the Team total to 43 points, 8 points ahead of the Swindon “Robins” who scored 35 points who finished ahead of the Leszno “Bulls” with the Zielona Gora side scoring just 18 points collectively, to finish in fourth place.

A good crowd of spectators enjoyed the efforts of all riders, who have improved dramatically over the three team events which have been held during the Mildura Winter. Never before has the Club been so active in the promotion of Senioe competition during the winter months.

Top scorer for Swindon was the skipper, Declan Kennedy, who also scored twelve points for the day while the lowest team, Zielona Gora, had the highest individual score with Justin Sedgmen scoring a well compiled, fourteen points to be the best single scorer. Sedgmen was in a class of his own in his team as the remaining three riders just contributed four points between them.

The four Team Tournament saw one rider from each team in each heat and while the Edinburgh boys always held sway on the scoreboard, the racing was always keen and the riders showed a good range of skills.

Mildura club officials have been impressed with the improvement shown by the riding group generally and riders themselves are acknowledging that they can feel that their individual speed has improved over the three monthly contests that have been happening at Mildura on the first Sunday of the month and at the Gillman circuit in Adelaide, which has been hosting monthly Saturday afternoon meetings.

The concept has already been proven as each of the Gillman hierarchy and the Mildura Club were keen to provide an opportunity for young riders, who have not travelled to the UK or Europe to further their speedway careers, to ride against similarly skilled riders in a ‘teams” aspect, which would improve the skillset of the riders, help them gain confidence at two “real” speedway tracks in Australia and eventually lead to a better class of riding from lads who have aspirations, but have not before had the opportunities to progress themselves as this Development program is achieving.

The crowds in attendance each month have been steadily improving, which is a reflection of the improvement in standard of the racing. The Mildura Club is using the opportunity too to “train” new officials into positions of responsibility in the meetings. New Referees, new Clerks of Course and new Pit staff have been given the chance to learn at meetings which, while still serious, are seen more for fun and learning opportunities. The training program, like the riding program, is improving the numbers and skills of individual officials.

Sunday’s Four Team Tournament was held over twenty very competitive heats where riders wore a specific helmet colour to indicate which team they were representing rather than for an individual meeting where each rider wears the helmet colour of his respective start gate position.

Riders reported that the Olympic Park track was presented in superb condition which is a testament to our Track Management staff, who work hard to set the track up so as all riders get an equal opportunity to do well. The Club knows that it is important that riders feel comfortable and safe on the track and that, while providing good grip for their machines, it also has enough dirt to provide riders with safe options should they get a little over zealous at any time. It is track like the one provided at Mildura today that gives all the best options to riders as they charge around the circuit at great speed.

The curtain raiser for today’s Senior event was the Junior “Jason Crump Shield,” which was presented to the winners by Jason’s grand father, Bob Crump, who is a Mildura Club Life Member and who has had a long association with the Club at Speedway meetings for more than forty years. The winner of the Jason Crump Shield for 2018 was Connor Bailey with Jackson Milner in second place while Patrick Bowes finished in third and Patrick Hamilton came home in fourth place. These four boys regularly take positions on the Junior podium.

The next Winter Development Program meeting at Olympic Park, Mildura will be on Sunday 5th August when more spectacular Teams racing will be featured. Patrons are reminded that the Junior program will always commence at 10:00am with the Senior Teams program set to commence at Noon each meeting.