Preston Motorcycle Club’s Bracket Racing Round 3 was held this past Sunday, the 22nd September at the Broadford State Motorcycle Complex.

Approximately 10% of the field were female riders, some having their first ever race.

Bracket Racing is open to all racers and lap times can vary from novice to very experienced.

The Preston MCC caters for all bikes, including Supermoto and historic bikes. It is a day of racing for everyone. 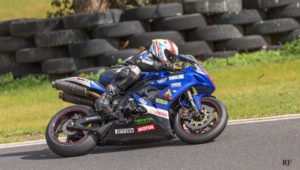 Lee Talbot and Katherine Knowlson made a 6 hour trip from Canberra to participate in the one day event.

Lee said she had “raced quite a few years ago with the St George Club, and thought that the bracket format was the ideal way of easing back into racing.” 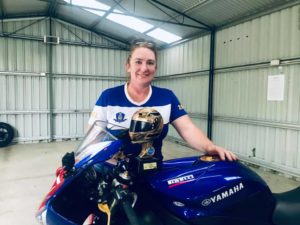 And, it certainly paid off for her, as she placed first overall in the T6 bracket.

Unfortunately, Kate’s day out was short lived after being clipped from behind and running off the track in a practice session, fracturing her wrist.
Everyone at Preston MCC and Motorcycling Victoria wish her a speedy recovery.

Katie Knight, riding a Kawasaki ZX6R in the T6 bracket, also had an on-track incident and only completed one race. 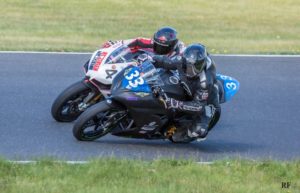 Lauren (“Loza”) Weaver and Emma de Rossi, who stood out in her bright green and pink leathers, both raced in the T7 bracket.

Anna Palasz raced in the T8 bracket. Some very close battles made for great spectating during the afternoon, with the podium results being up for grabs in every race.

Although not having raced for the last 3 years, Loza managed a cracking lap in race 4, resulting in a PB and also winning the race. Emma’s time improved a whole 2 seconds from the first to last race.

Overall on the day, Loza finished on the podium in third place with Emma in fourth place.

Anna dropped her lap time by 4 seconds from race 1 to race 4 and finished fourth in the T8 bracket.

Loza commented upon receiving her trophy that:
“it was good to see who she had been racing against – with helmets on and throttles pinned, it was hard to know who you were battling with.”

Stacey Van Watering took out overall first place in T5 bracket, showing improvement with each race – and taking home  the overall win! Stacey was very clearly chuffed and had this to say

“To some, it may only be ‘just’ bracket racing. To me, it’s better than straight-out balls to the wall racing. It’s all that regular crazy stuff, with the added constraints of forcing you to be smart, level headed, smooth and consistently consistent.”

Overall I think we can all agree these ladies are a force and should be inspring to anyone else thinking they might want to have a go.

It was evident from the smiles on the faces of the competitors that the day had been a huge success and lots of fun. The next round of Bracket Racing is on Sunday 20 October 2019 at the Broadford State Motorcycle Complex, and entries are open now Click Here.